Posted on March 9, 2018 by tradeswomenissues

For the week ending 3/4/18, NASDI, a demolition company working on the Gilbane site at 48 Boylston St in Boston’s Chinatown, has 22% tradeswomen’s hours, 75% people of color and 55% Boston residents. This was also the first site in Boston to hang the Build A Life That Works scrim on the site. Congratulations and let us know when your project or training program hits #20percentby2020! 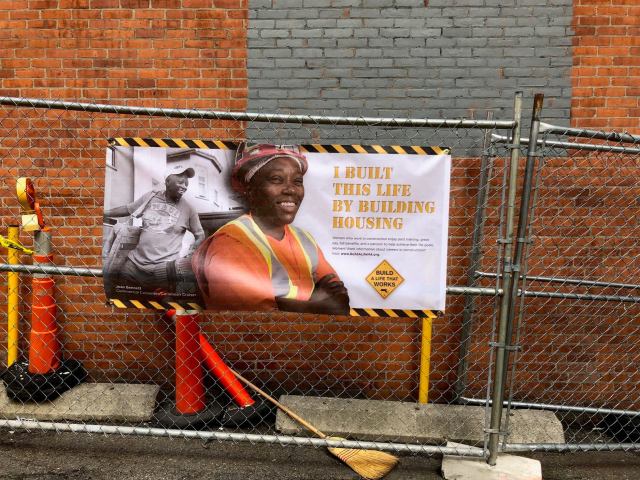 In memory of Outi Hicks, “Be That One Guy” who challenges sexism in the world of construction

Posted on February 14, 2018 by tradeswomenissues

Today, Valentine’s Day, is the one year anniversary of the murder of Outi Hicks, Carpenter apprentice, killed by a co-worker on a construction site in Fresno, CA.

Outi Hicks on her first job

The article below from the New York Times discusses the connection between sexual harassment on the job and the concept of “manly jobs” or, as the author describes it, “blue-collar jobs that once scored a kind of manly trifecta: They paid a breadwinner’s wage, embodied strength and formed the backbone of the American economy.” This certainly describes the benefits of the construction trades today for both women and men–good wages, hard work and building communities.

But along with those benefits has come a long history of sexism and discrimination against tradeswomen. Outi’s fate is one story and most tradeswomen have endless and often horrifying stories of their experiences of being the only woman in a “hostile work environment.” [PGTI’s founding document, Unfinished Business, documents this history.]

Over the past decade, tradeswomen and their allies, with the support of their unions and industry leaders, have been transforming the construction workplace in Massachusetts. In Greater Boston, it is now nearly normal for women to not be the only one on a construction site and, when harassment does happen, tradeswomen’s formal and informal networks across the state provide resources to protect the women and even to confront the problem man.

And that is usually where the story begins and should end– with one sexist man with the bad attitude, the bully, the idiot. He starts it, the teasing, demeaning, touching, threatening. The woman knows she could lose her job or worse and lacks the power to stop it.

At the 2017 Women Build Nations Conference in Chicago last October, Outi Hicks was honored and the Ironworkers’ Union debuted their Be That One Guy campaign. It is another tool for making the work safe for women and reaching the goal of 20% women by 2020, a tool that should be used on sites and in training centers throughout the industry. The alternatives, embodied in the memory of Outi and spelled out in the article below, perpetuate not only the danger and discrimination of the past but also an image and reputation that has injured the entire building trades movement. For a stronger and unified building trades movement, sisters, #WeAreOutiHicks, and brothers, #BeThatOneGuy.

Watch the PGTI webinar on recruiting women to union apprenticeship

Posted on February 9, 2018 by tradeswomenissues

Thanks to the Building Trades Employers Association and the Building Trades Training Directors Association for hosting our February 8 webinar, “HOW AND WHY: Best Practices for Recruiting and Retaining Women to Joint Construction Apprenticeship.” In the 50 minute presentation, we review area best practices and suggest questions for JATC directors, staff and trustees. Upcoming revisions to the federal apprenticeship standards will require JATCs to rethink their Equal Employment Opportunity (EEO) policies and reorganize their outreach, recruitment and selection practices. This can be an opportunity for JATCs to step up their recruitment of women and bring greater diversity to their apprentice classes and to the union workforce as a whole.

Click below to watch the webinar and contact us with questions, comments and requests for in-person technical assistance at tradeswomenissues@gmail.com.

“Only the union sector can supply the tradeswomen of the future.”

Posted on November 1, 2017 by tradeswomenissues

We often describe PGTI as a “learning community.” At our open meetings every other month (the next meeting is at 4 PM on December 20), a group of people who share the commitment to increasing and retaining women in the trades but who come from many different places in the construction industry, exchange knowledge and expertise from their area of work and generate new ideas for moving women forward in the industry. These ideas get integrated into our best practices document, Finishing the Job, and are incorporated into our Technical Assistance Workshops. A recent lesson has emerged from many discussions over time: Think Women First!

As industry stakeholders integrate new ideas into their business practices, too often women are part of a longer list of diversity requirements. When we begin with other categories such as “minority,” veteran or resident, the population that is targeted is usually male. By default, women become the last category. But women are veterans and residents and at least half of the women entering the industry in Massachusetts are women of color. When contractors and apprenticeship programs target women first, they are very likely to fulfill two or more categories of workforce requirements. In addition, of course, women are the most disadvantaged group in the construction trades. We are aware of only one project in the Commonwealth that has ever reached any federal, state or municipal target. The best practice for increasing and retaining women in the trades is think women first and put women at the top of the list. For outreach and recruitment, put women first. For hiring and referrals, put women first. And for layoffs, put women last.

Updates on outreach to tradeswomen of the future

Posted on July 26, 2017 by tradeswomenissues

The Connecticut Building Trades have launched the latest Building Pathways Pre-apprenticeship Program to bring more women into the trades. PGTI will be conducting diversity training for participants in August. Check out their FB page, Building Pathways CT to see their first cohort of students as they progress.

The National Association of Women in Construction (NAWIC) is hosting a Girls Construction Camp in Kansas City. Can we get this in Massachusetts?

Outreach to women in Boston’s neighborhoods